An air quality sensor that will dramatically improve the way scientists measure air pollution over North America has been joined with its satellite host.

NASA’s Tropospheric Emissions: Monitoring of Pollution (TEMPO) instrument was integrated with Intelsat 40e by Maxar’s Space Program Delivery team in Palo Alto, California. From its geostationary orbit — a high Earth orbit that allows satellites to match Earth’s rotation — TEMPO will take hourly daytime observations of air quality over an area that extends from Puerto Rico to northern Canada, from the Atlantic to the Pacific, encompassing the entire continental United States.

“Because of the hard work and dedication of the entire TEMPO team including our Maxar, Intelsat, and Ball Aerospace partners, we are excited to have completed this significant step toward launching with the IS40e spacecraft ” said Kevin Daugherty, TEMPO project manager at NASA’s Langley Research Center in Hampton, Virginia. “We are looking forward to completing the instrument integration and spacecraft testing in the coming months bringing us closer to delivery of TEMPO’s critical air quality science.”

Air pollution — including ozone, nitrogen dioxide and formaldehyde, and tiny atmospheric particles called aerosols — can have serious consequences for human health and the environment.

Currently scheduled to launch in 2022, TEMPO will also form part of an air quality satellite “virtual constellation” that will offer a more holistic view of how pollution is transported around the Northern Hemisphere. Ball Aerospace in Broomfield, Colorado built the TEMPO instrument.

Kelly Chance, of the Smithsonian Astrophysical Observatory in Cambridge, Massachusetts, is the principal investigator for TEMPO.

It’s 3 a.m. in Salina, Kansas. The moon is out. Crickets are chirping on this balmy summer night. The light above the door to the hangar softly illuminates the sign that reads “DCOTSS.” Most teammates are just waking up. I unlock the door and walk in to be the first to start this long but exciting day full of new discoveries. It’s yet another start of a typical day of a forecaster for the NASA Dynamics and Chemistry of the Summer Stratosphere (DCOTSS) field campaign. 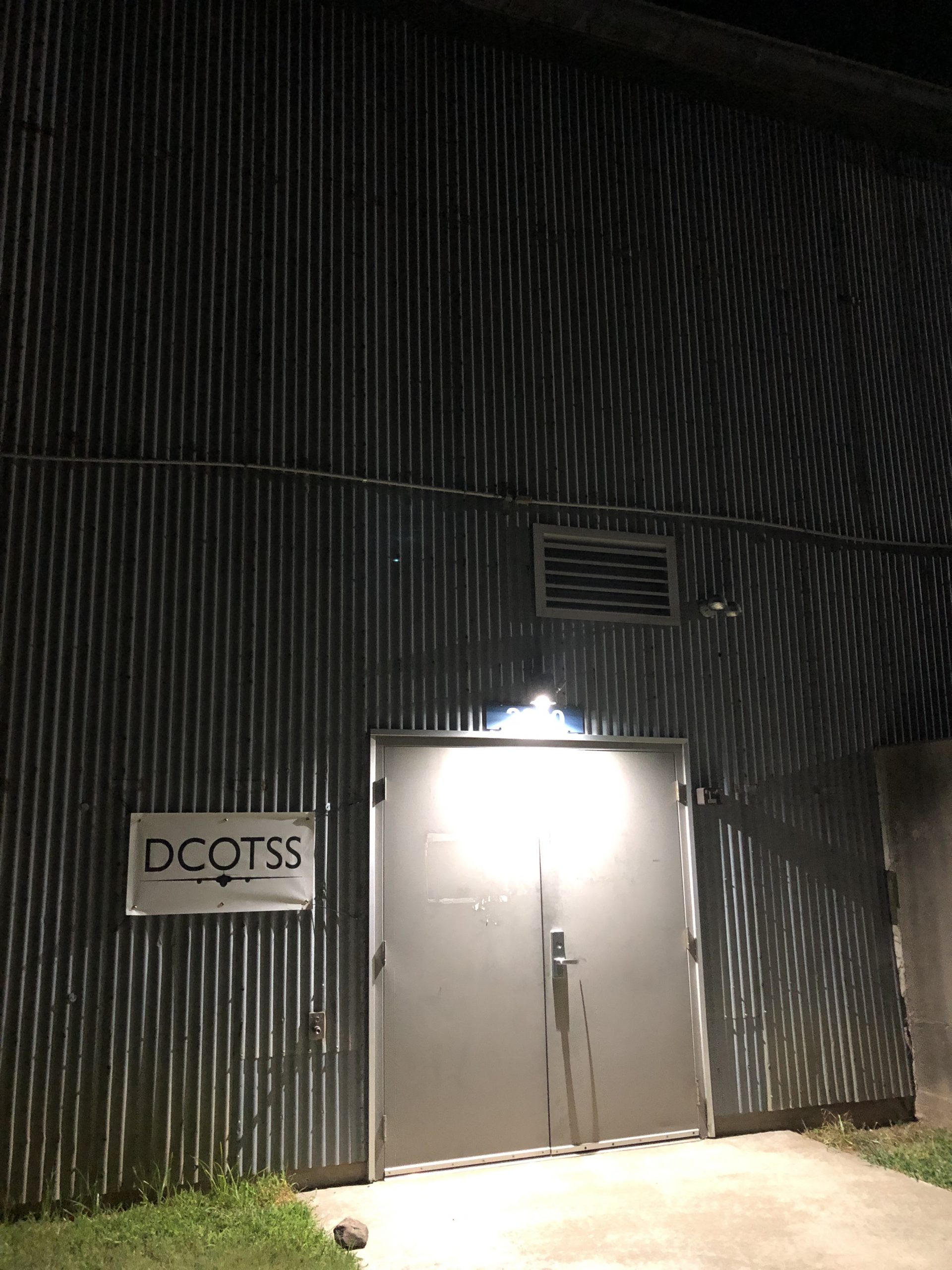 A picture of the door to the hangar taken by me (Rei Ueyama) on the morning of DCOTSS Research Flight 04 on 26 July 2021.

About 50 of us have gathered here (and 20 more to arrive later) in the middle of the continental United States in search of strong convective storms that penetrate high into the atmosphere. These so-called overshooting storms carry water and pollutants from the boundary layer and troposphere (where we live) into the atmospheric layer above us called the stratosphere. Small turrets at the top of these strong storms overshoot into the stratosphere, and hence its name “overshoots”.

The stratosphere is a much different environment than the troposphere. For one, it is extremely dry. It also has many molecules of ozone that make up the ozone layer which protects us from harmful ultraviolet rays. Various materials pumped up from the troposphere into the stratosphere by these overshooting storms may alter the chemistry and composition of the stratosphere, which could ultimately affect Earth’s climate quite significantly. So we’re here to find out exactly how and to what extent these strong convective storms influence our climate. 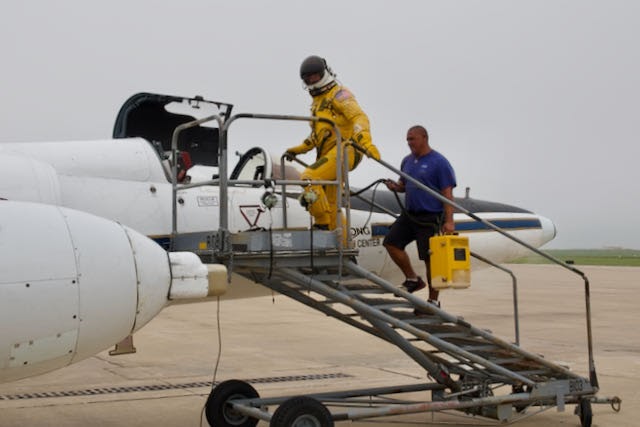 Our vehicle for exploration is NASA’s ER-2 high-altitude research aircraft. The ER-2 is a single-occupant, lightweight airplane with a long (31.5 meter) wingspan that flies gracefully at altitudes up to 70,000 feet in the stratosphere, which is about twice the altitude of commercial airplanes. Air is so thin at those high altitudes that the pilot must wear a pressurized spacesuit in case of a loss of cabin pressure. Inside the nose, body and pods under each wing is like a jigsaw puzzle of many scientific instruments. Each instrument measures specifics gases in the atmosphere which are later analyzed to hopefully tell us a story about how convective storms affect the stratosphere. 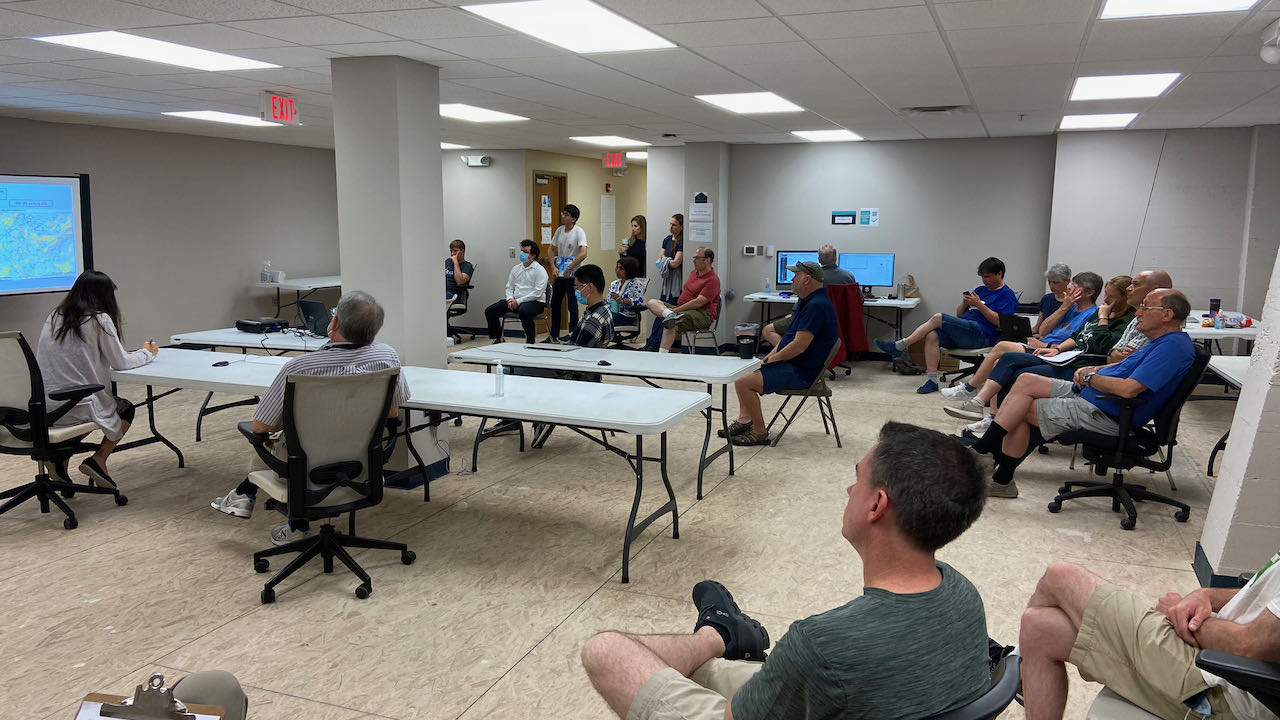 A picture of forecasting and flight planning meeting on the morning of 15 July 2021. I am sitting in the front left corner (my back facing the camera), leading the meeting. Photo credit: Dan Chirica

My role in DCOTSS is to lead a group of forecasters and flight planners to provide our best assessment of where the outflow plumes from overshooting storms may be located on the day of a science flight and then design a flight plan to sample those plumes. This is no easy feat as these plumes of overshooting material are often tenuous and sparse such that our effort often feels like a search for a diamond in a haystack.

As we rub our just-awoken eyes and scrutinize the early morning images of overshooting plume forecasts from satellite and radar-based models, the instrument scientists begin to arrive at the hangar to prepare their instruments for a 6 to 7 hour flight. The flight plan is tweaked, the pilot is briefed, and we are ready to go. 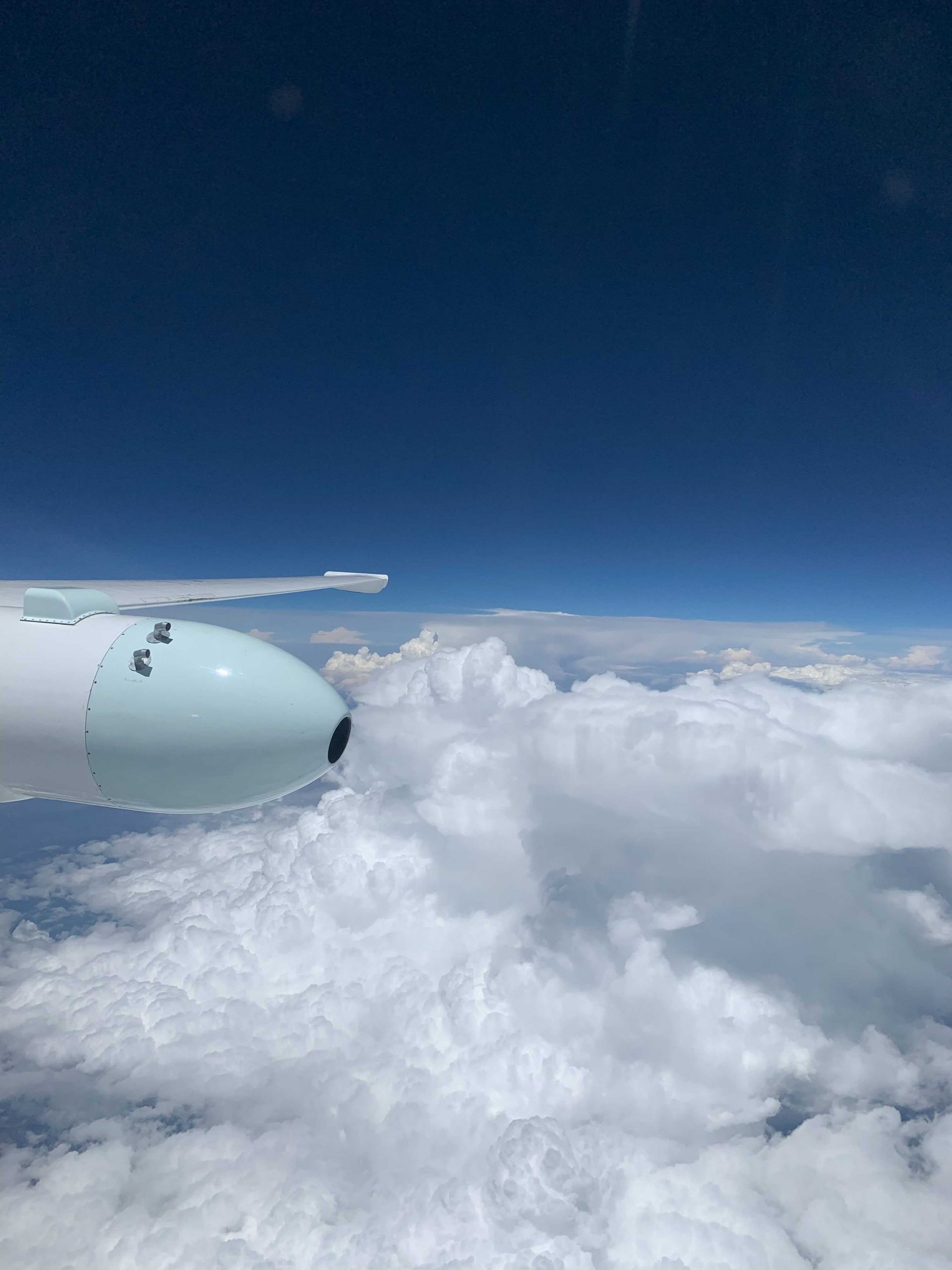 Watching the pilot navigate the ER-2 just as we had planned is very humbling and satisfying. But at the same time, our nerves are running high as the measurements from the instruments start to trickle in from the aircraft to the mission operation center on the ground. How good was our plume forecast? Do we see any indication in the measurements that the ER-2 had actually flown through a convective plume? On many occasions, it’s too early to tell. The diamond usually only shines through after the flight has been completed and after a thorough analysis of the collective measurements. Yet we are glued to our computer screens, holding our breath as we look for any signs of a convective plume in the real-time measurements.

Our job is mostly done for today, but there is no reprieve. We now look into the future to plan our next science flight. Time to hunt for another overshooting storm!