Yesterday was a hard down day for the team – everyone needed a rest after a very active week before. The hard down days are in NASA airborne rules and ensure that fatigue does not set in and keep everyone’s safety the top priority. 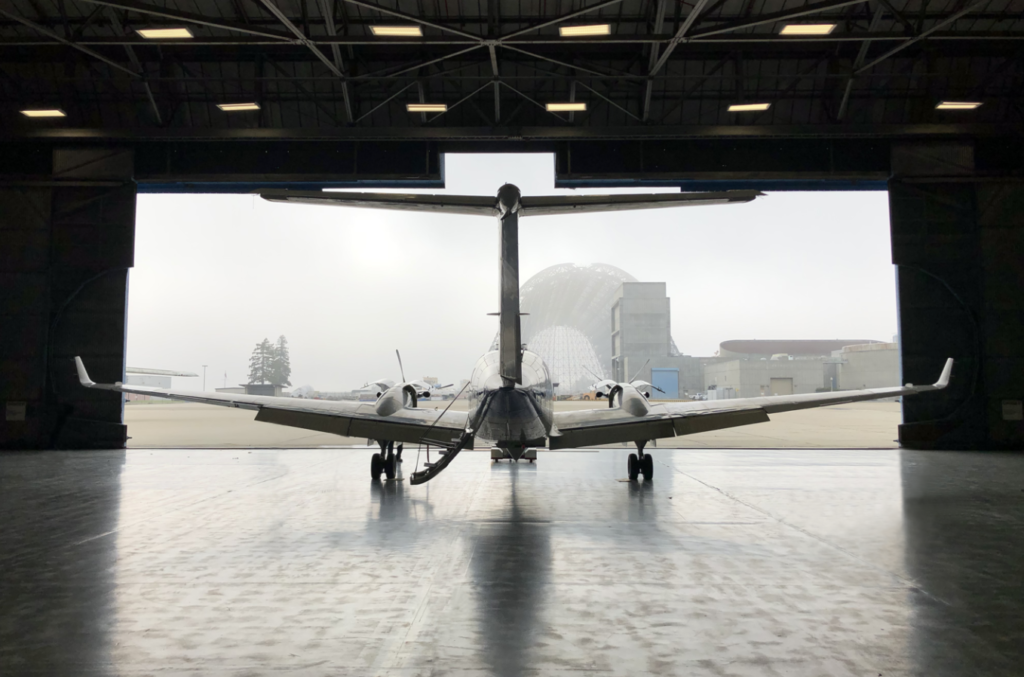 To fly or not to fly … Today is supposed to be a good day for optical measurements but the pesky fog is really not willing to leave the area of S-MODE operations. We sit and wait for updates from the ship, satellite imagery and forecasts. In the meantime, we are using the Saildrone measurements of wind speed in the area of interest to determine if it’s worthwhile to operate DopplerScatt. The winds are very low. The hourly reports are telling us that the winds have been below DopplerScatt’s threshold for the whole morning, reporting wind speeds of one meter per second. At this wind speed the ocean surface is very still, so still that it may look like a mirror. This is bad news for radar signals bouncing off the surface as their strength depends on the surface roughness. No dice for DopplerScatt today, and the same decision was made for the MOSES and MASS instruments on the Twin Otter.

Remember that pesky problem with the monitor from last week? I overnighted a replacement monitor for the DopplerScatt team since yesterday was a doozy with no flights, they decided to swap out the monitor and keyboard on the plane. Trouble is they did not test that it worked. We just thought, “well what could go wrong, it’s the same model.” What do you know, it did go wrong! I’ll spare you the details and the frantic messaging between myself and the operators, but after some time they realized that the power cable was not plugged in and the monitor was not getting power. All in a day of DopplerScatt deployments! 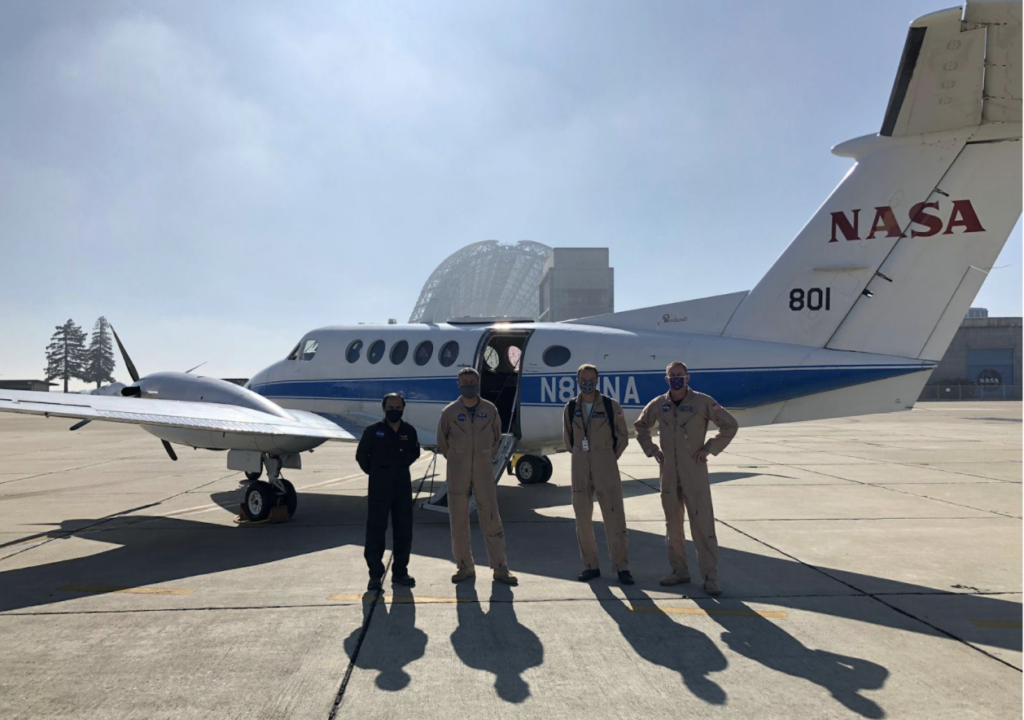 Today is a science extravaganza! We have a big day ahead of us with two NASA King Air B200 flights planned and all of the in-water assets sampling data throughout the day. The weather is finally cooperating and we have a clear yet windy day ahead of us. The plan today is to fly a morning flight – which just took off at 8am – and then another one leaving approximately 6 hours later and flying the exact same pattern. The comparison of data between the two will tell us about the daily variability of the ocean processes.

“This is one of the reasons why I am so excited about S-MODE,” said Hector Torres, DopplerScatt team member, operator and one of the main people responsible for simulating ocean processes. “The results based on theory and numerical simulations produced in the last five years are about to get confirmed or debunked today. Either way it will be a breakthrough!”

Flight one is now done! There were some pesky low clouds right in the area of collection that prevented MOSES from collecting quality data for half of the flight, but the second half was great. DopplerScatt data collection went as planned and data are churning already! We are seeing the first quick look data products trickle in as we watch the afternoon flight take off.

While the first flight was a bit difficult for our optical colleague running the MOSES system, Jeroen Molemaker from the University of California, Los Angeles, the afternoon was gloriously clear and provided a great opportunity for all airborne instruments to collect data at the same time.

Quick look composite image of the sea surface temperature as observed by the MOSES instrument on the November 4, 2021 afternoon flight. The tracks are overlaid on DopplerScatt derived surface current velocities from the morning flight, showing the spatial relationship between currents and density fields. The color scale blue to red has a range of 2°C. Credit: NASA’s S-MODE team / Jeroen Molemaker

Today the S-MODE pilot experiment operated as we envisioned many months ago, with all platforms sampling data throughout the day over the area of interest. The field experiment crew is tired but happy and the team is excited about the science that we will extract from this data set. 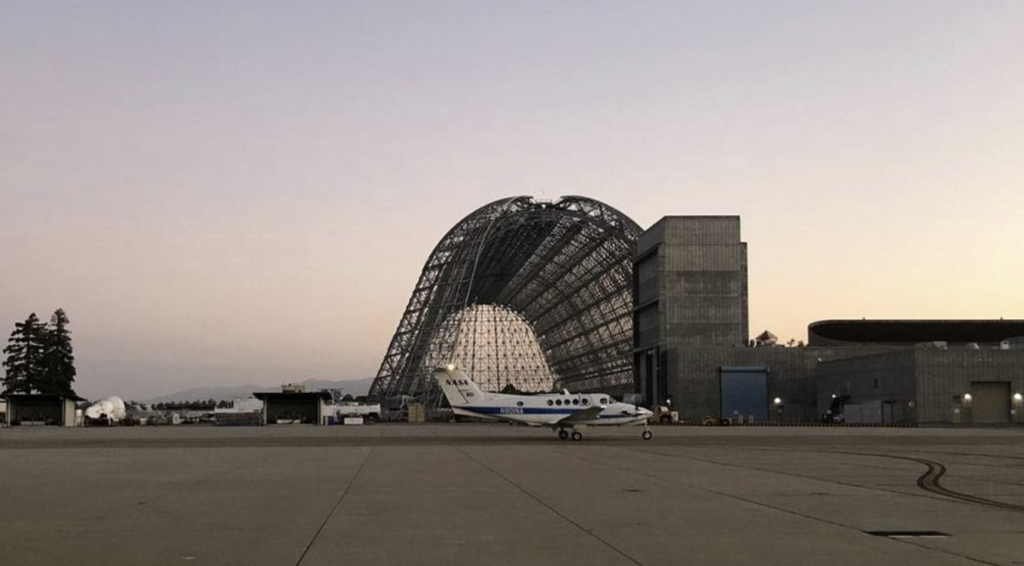 Today is the final day of the S-MODE pilot campaign. It’s a bittersweet feeling for me as it was so much fun to collaborate and coordinate daily activities with so many people. I will miss that, but I certainly will not miss the hectic calls of “we have a problem with …”

The NASA King Air B200 will fly in the afternoon collecting data in the western region of the S-MODE study area together with the Twin Otter aircraft. Meanwhile, our friends on the ship will start recovering the autonomous assets and make their way toward Newport, Oregon.

Trouble struck again as our GPS unit could not get itself aligned and produce a good navigation solution, requiring a power reset and making S-turns i.e. banking the aircraft left and right in succession. After this excitement things went smoothly for the rest of the flight. You never know what will go wrong during a field deployment, you just know that something will and you need to be prepared to react and fix things without letting the panic set in! Thankfully that is what happened today thanks to Alex Winteer, a DopplerScatt operator from NASA JPL. He performed a cool and collected power reset while in air! 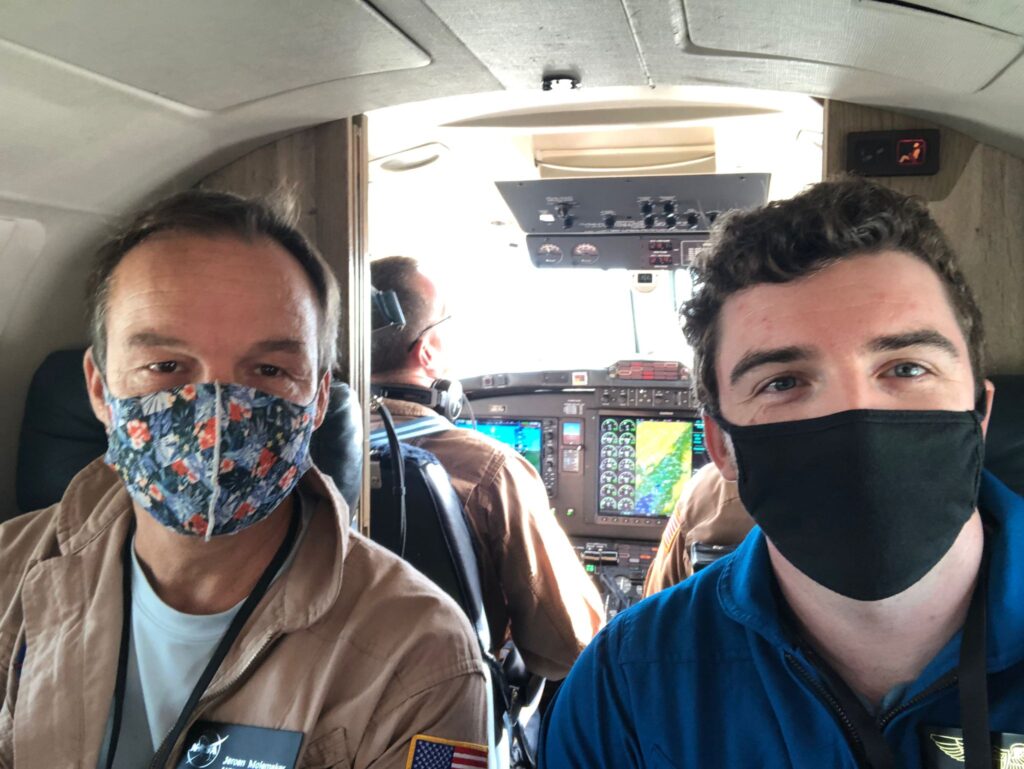 Happy crew on their last flight of the S-MODE pilot campaign. On the left is Jeroen Molemaker (UCLA MOSES operator) and on the right is Alex Wineteer (JPL DopplerScatt operator). Photo credit: Karthik Srinivasan / NASA JPL

Now it is time to work on our post-deployment to do list and eagerly await results of data processing.

I will leave you with two short blurbs from DopplerScatt team members Alex and Karthik about their impressions of the pilot campaign.

“On most days, you don’t wake up looking forward to a boring day. As an instrument operator, a boring day during a deployment, however, is a different story. You look forward to sitting in a small round aluminum tube for 4.5 hours with nothing to do. That is a perfect day – a day when the radar just works. No last minute excitement of monitors not turning on (because someone unplugged it and forgot to plug it back in!) or the satellite phone connection not working. While the entire science team is excited about an action-packed day of coincident data collection, all the instrument operators look forward to is a day where everything just works as it should! Of course, sitting in an aluminum tube for many hours, staring out at the ocean with nothing to do makes you yearn for some excitement, but that is a fleeting thought until you get a text message via satellite link asking you to pay attention to the speed of the aircraft!”

“I’ve been on quite a few field deployments with DopplerScatt, but none quite as exciting – or as important—as this one. Indeed, such a coordinated effort consisting of multiple aircraft and many assets in the water has never been attempted, and the resulting science will lead to new understanding of our ocean, atmosphere and the climate system as a whole. On Thursday, we attempted two flights for the first time. I operated the first flight: crew brief at 6:30 AM with a takeoff time of 8 AM. Thankfully, our instrument operated normally, and we were able to fly a bit lower –under the clouds – to ensure MOSES could see the ocean surface with its infrared camera. We landed five hours later, at around 1 PM, and I immediately took our data back to our field processing center in the aircraft hangar to start crunching. In the meantime, Karthik took off for our second flight of the day. By the time I finished the first round of processing, it was 5 PM and Karthik was almost back from the second flight, so I went downstairs to welcome him back (and grab the data!). A few hours later, we had both flights processed to quick look data products and I was exhausted. Being just one person, a small part of a much larger mission, it can be easy to lose sight of why we do this, especially when the hours are long. But when the data started pouring in, my exhaustion was quickly replaced by excitement. We were seeing a dataset no one had ever seen before. With these two flights, we are able to not just see the sub-mesoscale structure of the ocean surface over a large area, but we could also see its evolution over time and how the atmosphere interacts with that evolution! There is much work to go in analyzing these data, especially in comparing the many other instruments to our DopplerScatt measurements, but I am grateful to play a part in that analysis, discovery and understanding.”