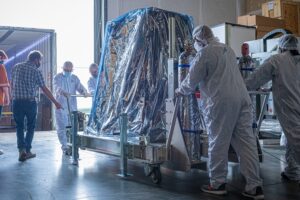 A NASA satellite instrument that will measure air pollution over North America has reached another key project milestone. On Tuesday, May 18, The Tropospheric Emissions: Monitoring of Pollution (TEMPO), instrument, which will take hourly daytime measurements at an unprecedented spatial resolution shipped from Ball Aerospace in Broomfield, Colorado, to Maxar Technologies’ satellite manufacturing facility in Palo Alto, California, for integration onto the Intelsat 40e.

Ball completed building TEMPO in 2018. After its scheduled launch in 2022, the TEMPO instrument will make measurements of air pollution —including ozone, nitrogen dioxide and formaldehyde, and tiny atmospheric particles called aerosols — that can damage human health and the environment. Those measurements will reach from Puerto Rico and Mexico to northern Canada, and from the Atlantic to the Pacific, encompassing the entire lower 48 United States.

“This is an exciting time for the mission,” said Kevin Daugherty, TEMPO project manager at NASA’s Langley Research Center in Hampton, Virginia. “We are about to begin integrating the TEMPO instrument with our host satellite and undergo testing to ensure the satellite can survive the launch and environment of space prior to being launched into space.”

From its geostationary orbit — a high Earth orbit that allows satellites to match Earth’s rotation — TEMPO will also form part of an air quality satellite “virtual constellation” that will track pollution around the Northern Hemisphere. South Korea’s Geostationary Environment Monitoring Spectrometer (GEMS), the first instrument in the constellation, launched into space last year on the Korean Aerospace Research Institute GEO-KOMPSAT-2B satellite, and is measuring pollution over Asia. The European Space Agency Sentinel-4 satellite, expected to launch in 2023, will make measurements over Europe and North Africa.

Kelly Chance, of the Smithsonian Astrophysical Observatory in Cambridge, Massachusetts, is the principal investigator for TEMPO. 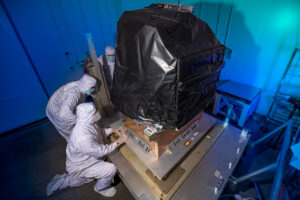