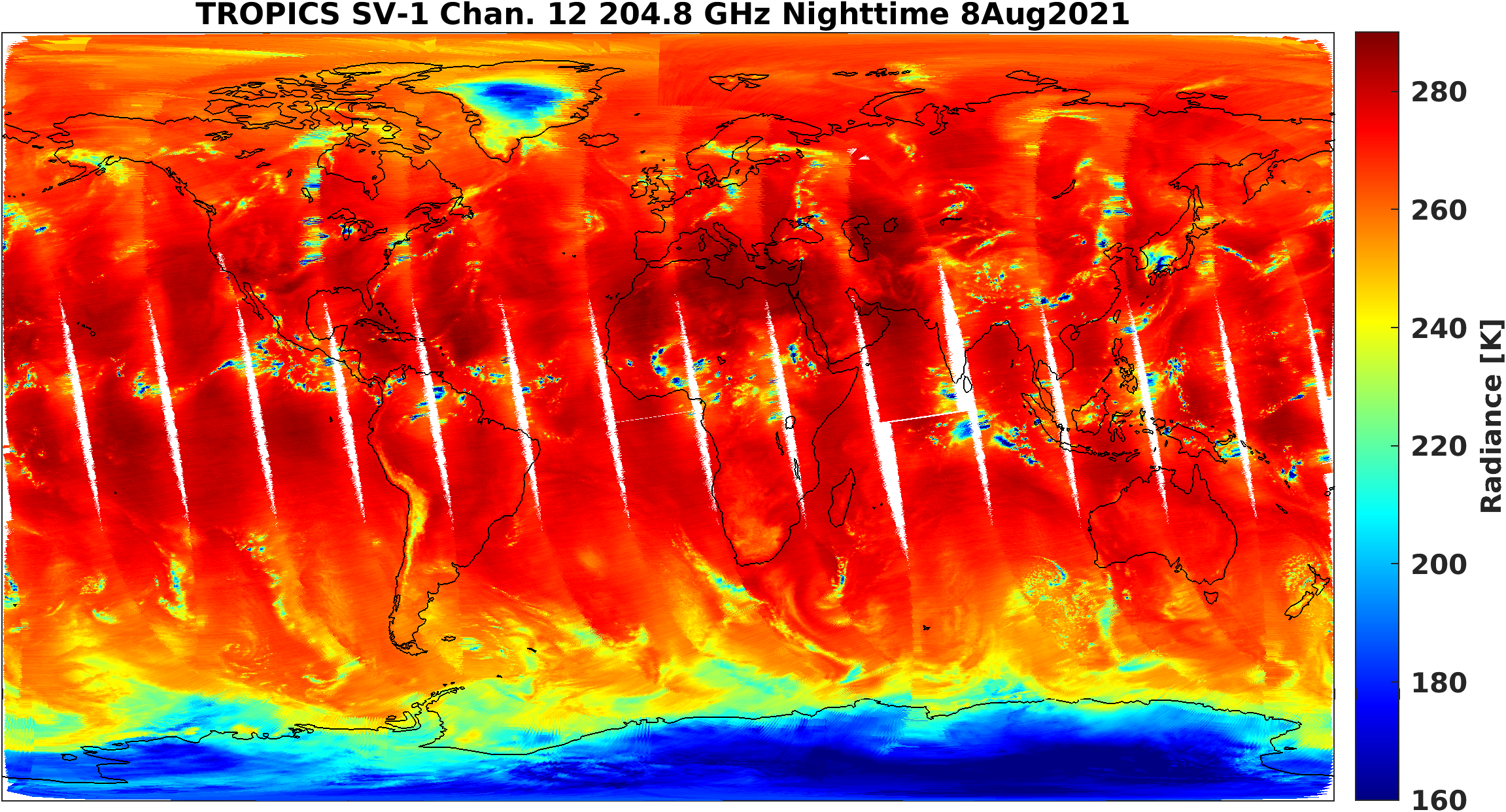 On August 8, NASA’s TROPICS Pathfinder satellite captured global first light images as well as a look inside the structure of Hurricane Ida before and after it made landfall.

The satellite launched on June 30, 2021 as the pathfinder – or test – satellite for NASA’s Time-Resolved Observations of Precipitation structure and storm Intensity with a Constellation of Smallsats (TROPICS) mission. The Pathfinder satellite provides an opportunity to test the technology, communication systems, and data processing before the six satellites comprising the TROPICS constellation launch in 2022. “[Pathfinder] is like a dress rehearsal of the mission,” said Bill Blackwell, the principal investigator for the TROPICS mission and a researcher at the Massachusetts Institute of Technology Lincoln Laboratory in Lexington, Massachusetts.

The future TROPICS constellation will orbit Earth in three planes, collecting temperature, water vapor, precipitation, and cloud ice measurements on a frequent, near-global scale to study storms and other meteorological events. The idea is that multiple satellites in spread out orbits will collect more frequent measurements around the globe, allowing scientists to study storms as they develop and then use the newly-acquired knowledge to improve forecasting capabilities. The TROPICS research team includes researchers from NASA, the National Oceanic and Atmospheric Administration (NOAA), and several universities and commercial partners.

“Early in the mission, the Pathfinder satellite has already demonstrated the usefulness of this data – especially the images of Hurricane Ida. We’re able to see a lot of features that we want to study with the TROPICS constellation,” said Blackwell. 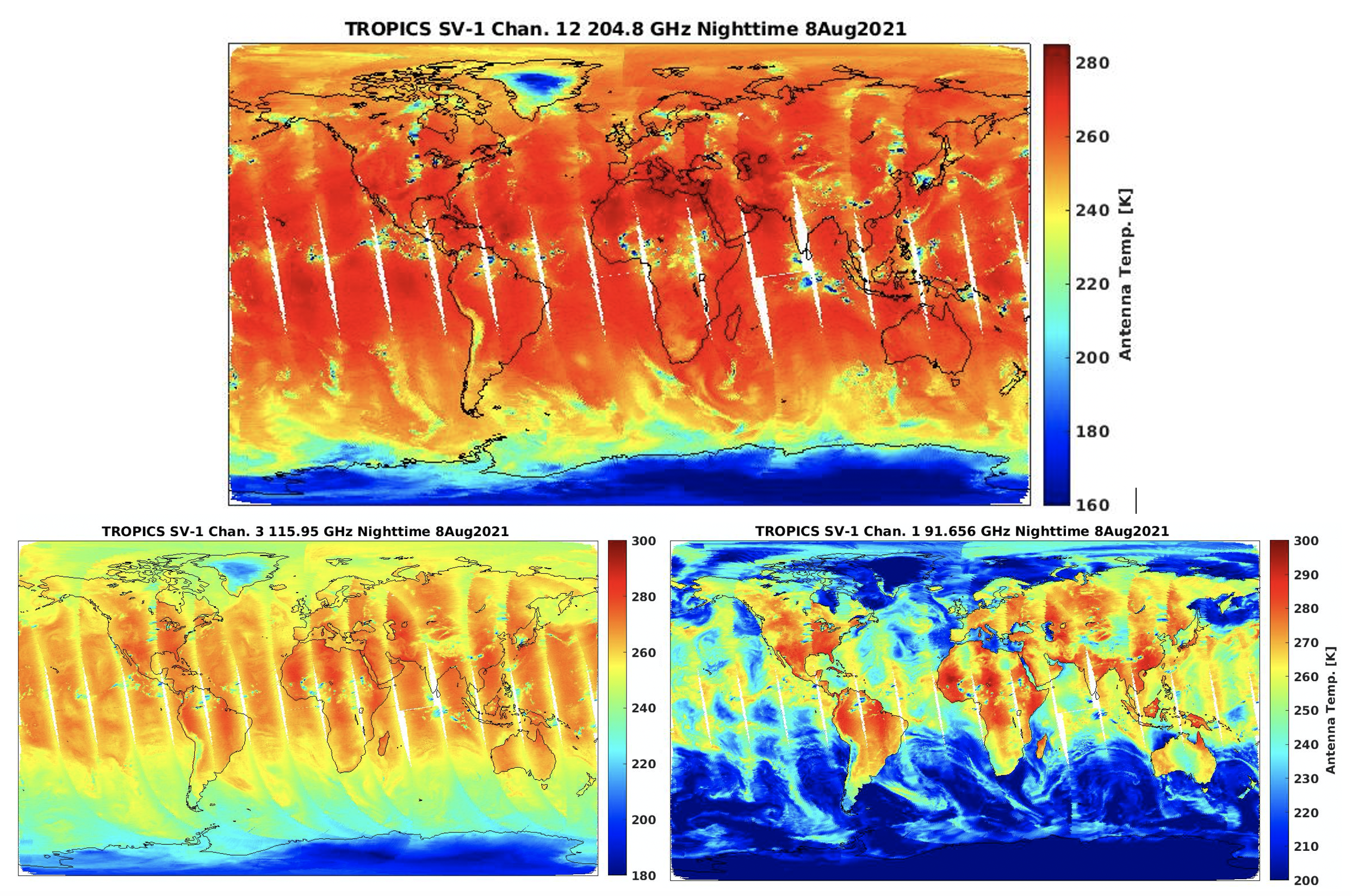 The global first light images show microwave data collected at several frequencies, each giving scientists a different piece of the larger puzzle of thermodynamics in Earth’s atmosphere. The image, comprised of 91 GHz data, shows water vapor, including swirls of atmospheric moisture over the ocean. The data from the 115 GHz frequency provides measurements of temperature at Earth’s surface and in the lower atmosphere. The 205 GHz data yields measurements of the precipitation-sized ice particles contained within clouds. “This is the first time we’ve flown a microwave cross-track sounder using that high of a frequency,” said Blackwell. The microwave cross-track sounder is an instrument that collects temperature and water vapor data using microwave radiance observations. “It’s very sensitive to observe ice in the cloud tops, which can give us an indication of the intensity of a storm.”

TROPICS Pathfinder also captured images of Hurricane Ida on August 28 and 29, just before and after the storm made landfall in Louisiana. Read the full story about these images on the NASA Applied Sciences website. 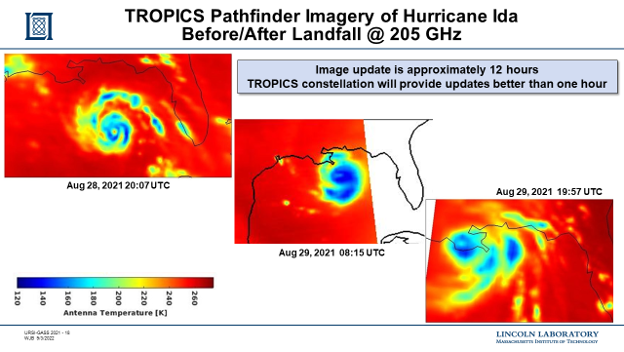 “What the constellation will give us that we don’t have today is higher revisit rates – so we’ll be able to observe storms from space at microwave frequencies much more frequently than we can now,” said Blackwell.